LAHORE – On New Years Eve, at approximately 15 minutes past midnight, a pitbull was shot 3 times with a rifle.
This dog belonged to a resident of phase 1 DHA and was brutally murdered by her neighbor. The accused claims to be a barrister for NAB.
Shortly after killing the dog, the accused Ahmed Umar Saqib went to the neighbours house who owned the dog and said he was trying to protect his 4 year old daughter at home who the dog was about to attack. Upon further investigation, it was found that he had no daughter or any child at his home.
When he was confronted by the owners of the dog why he shot their dog not once but three times despite of fake story of a child, he responded to both the women with abuses and called the police. While he remained behind his gate, he lifted his hands up to physically assault the women. He offered no explanation to the women as to why their dog was shot thrice and left on the street. When the police arrived, he hauled insults at the women and the driver who accompanied them with an attitude as he is invincible because of being a barrister. At the police station, it was discovered that the rifle used on the dog was not under his name. He also had no reason for shooting the resident dog except “he was a dangerous dog that’s banned in the US”, and that he was so scared to see the dog that he shot him three times. He apologized saying it was an accident while admitting he intentionally shot the dog three times which invalidated the word “accident” altogether. At the police station when he was asked again why he abused the women rather than offering an explanation, he briefly laughed and continued to use his phone. 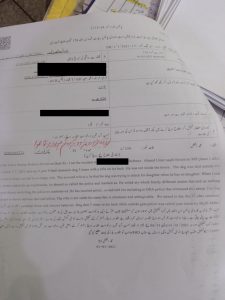 Over the period of just 24 hours, the accused also insulted the police personales telling them that he is a barrister and he wants to fire an FIR against the owners of the dog he killed for no reason. Also, he has been trying to malign the police operations by using his so called sources. The accused committed several blunders simultaneously; using illegal weapon, killing pet, harrasing women, and trying to malign FIR.