The Federal Public Service Commission has announced its results for the Combined Competitive Examination for the Central Superior Services (CSS) for the year 2019. Let’s look at interesting insights about the results.

Out of these 365 qualified, 214 were allocated to different occupational groups. So, 132 men and 82 women are allocated this year.

Who is the Topper?

Interestingly, his brother Rana Musa Tahir was allocated to Pakistan Administrative Service in CSS 2017. One of his brothers, Rana Hussain Tahir is already part of Police Service of Pakistan (PSP).

Another interesting fact is mentioned in thee tweet below about the topper being from different gender every other year from last few years.

Interestingly, the prominent positions this time were grabbed by the candidates from Gilgit Baltistan/FATA. In this regard, Uzair Ali Khan stood third and opted Pakistan Administrative Service. Junaid Alam stood at 14 while Muhammad Shahsawar Shareef stood 15th.

Interestingly, another sister of the Sher family, Zoha Malik Sher got allocated to the Office Management Group (OMG). This Sher family has now 5 sisters as civil servants. Sassi Malik Sher re-appeared in the CSS exam for 2019 but was not able to be allocated. She is already part of Military Lands and Cantonment Group (MLCG).

Some other insights have been cracked by a civil servant, Junaid Afzal which are as follows:

Number of Seats by Groups

The minimum number of seats was offered by Railways group i.e 1, followed by Military Lands and Cantonment which would have merely 2 officers this time. Inland Revenue Service has a maximum of 47 officers for CSS 2019.

Interestingly, the Office Management Group which had around 75 officers for CSS 2018 would have only 22 officers this time.

Commerce and Trade Group and Pakistan Customs service each have 7 officers this time.

As many as 124 officers are selected from Punjab followed by 29 from Khyber Pakhtunkhwa. 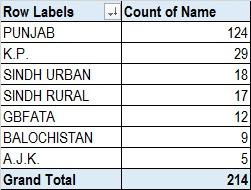 The data about the ones who passed the written and interview but could not secure allocation is interesting.

It shows that Punjab is the battleground, be it politics or civil service. The percentage of unallocated candidates here is a whopping 51 percent. As many as 124 candidates were allocated but 129 were left unallocated. 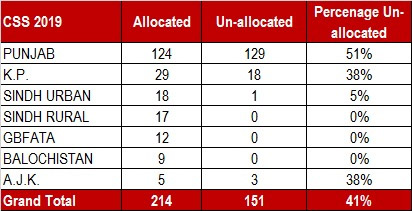 If we analyze the data on the basis of gender, we come to know that 51 women from Punjab, 11 from KPK, 10 from Sindh Urban and only 1 from AJK made it to the list of the allocated candidates.

Nine women from Punjab got allocated to the Inland Revenue Service group while one each from Sindh Urban, Sindh Rural and Balochistan.

A shocking truth in the data extracted by the civil servant confirms that the percentage of allocation of women has been decreasing over a period of 5 years. 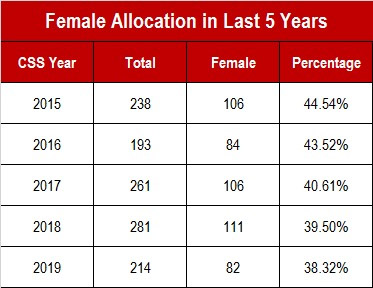 Starting from CSS 2015 result, the slope is downwards which is alarming.

The graph below shows the rate as moving downwards. 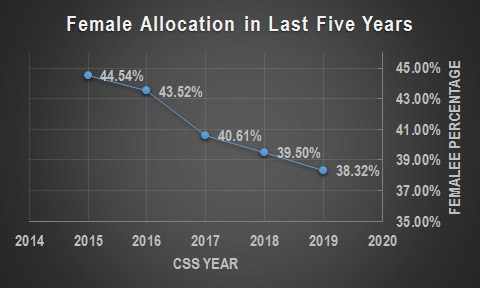 Who is MUHAMMAD ATIF JALIB, the absentee is Viva?

Muhamamd Atif jalib did not appear in interview after having passed the written part but WHY?

The reason is that Muhammad Atif Jalib had been allocated to the Pakistan Administrative Service in CSS 2018. He had appeared in CSS 2019 exams when the result for CSS 2018 was not announced.

What about the ones unallocated

So, it’s a moment of joy for the ones allocated but what about the ones unable to secure allocation.

Having gone through the tweets of serving civil servants, it is evident that CSS is not the end of life. There are multiple ways to live life and earn livelihood.

Civil Service is a path to serve the country but not the only path in this regard.

As far as money or fame is concerned, most of the people who are not civil servant make more of them. In fact the civil servants keep on complaining about the low remuneration.

So, those who were unable can think over and try to re appear but even if they don’t want to re appear, it’s perfectly fine.

Just a few years down the road, you would forget these moments though currently it is difficult to digest these results.

Remember, you have not failed this exam after all. And most importantly, it’s about destiny as well. Ask from the civil servants and they would reply that it’s not the hard work which helped them pass CSS exam but the luck or you can say blessings or karma.

The writer is a civil servant. He can be accessed here.